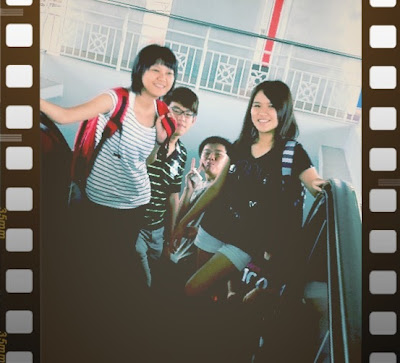 2 days ago, half way editing my first post. I got a text from a friend of mine, asking where was I and they wanted to meet at the lrt station. We were going to Wangsa Walk. Told them to go first but heck, they just gotta insist.  Some people will just signal, " I'm at 'x' now, take your time. . " but this friend of was real straight. He called instead, "Eh, where you? We reach lrt station already, faster come." Even had to run to the meet up point.


If you happen to read this and feel guilty, have this finger mlm, you'll feel better.

If it's not clear enough, here's a magnified version o0o . There, :D .


So yeah, took the lrt from Wangsa Maju to Sri Rampai before walking around 10 to 15 minutes to Wangsa Walk. Actually it took us a wee bit longer because 2 highness of ours can't stand the sun. Understandable, since the sun was hot but in college even when it was cloudy, they also needed the umbrella. Something I will never understand. Maybe they have Obsessive Compulsive Disorder? Imagining the wildest things like how being exposed to sunlight for just a few minutes is fatal.

Having said 2 highness was with us, guess the first shop they entered. 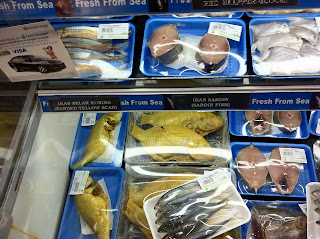 Cant see clearly?
These 2 dudes wouldn't really mind though.
= = =
After all that, we went to try Popeyes. .
Just not my taste.. Chicken in KL always tastes bad. If you happen to be a Kuchingite, you wouldn't disagree with me.
= = =
Off to Yamaha! 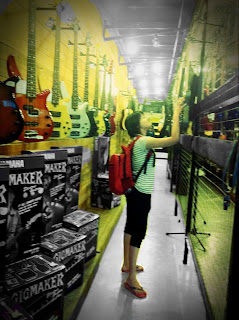 Finally!
Fingers were itchy all along. So shot a few pictures. If I didn't recall wrongly we were in that shop nearly an hour. Had a good time till the Manyzer came to give her speech bout how she noticed we were in the shop blah blah blah.. That lecture.
= = =
After getting kicked out, I went to the shop just beside Yamaha, I wanted to check on the DSLRs..
I went in and asked bout the price, specs, and recommendations for the DSLRs . . .
Before I left that shop, I found out that they also offer short photography courses @ RM50 for a 2 hour session. It's very limited however, a maximum of 10 pax. per session. He told me that for some of the courses, they'll have model hired for shooting.
For more information,   go to:        http://www.fourtwentycreative.com/
There's this one stall outside that has DSLRs and lens on the shelves but when I asked.
I got a "Just for display".
Lan Lan.
This reminds me of what my friend said about kopitiams..
= = =
Then we went to Secret Recipe. The girls did all the eating while guys on budget like us just drooled.
Okay, not really. We were offered the leftovers. Very considerate of them . . . 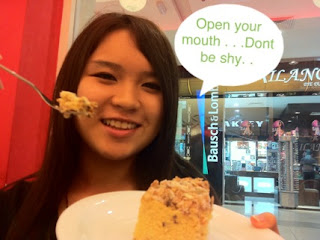 At least I got a few shots and 2 of my friends became couples in the end . .
Congrats!
One turned Emo however . . .
P.S. : Please let me die a quick death if you intend to kill me after reading this post . .  :D
Regards,
Imperfecion
Posted by Imperfecion at 14:48